What Natural Disasters Can Teach About Investing

By: Emma Li
In: Featured, Investing
With: 11 Comments 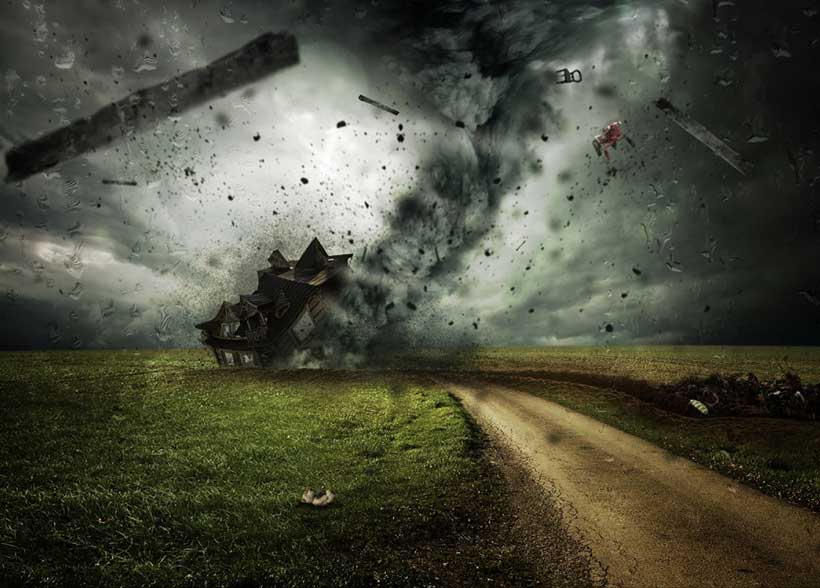 Imagine sitting on an airplane with several other passengers. When you look up, however, you see the top of the craft has been torn off, revealing a deep blue sky and calm tranquility outside. Columns of smoke and flames consume the cabin. To your left and right are holes in the sides of the airliner that lead to your freedom. How would you react?

This seems like an easy hypothetical, right? Maybe you think you’ll quickly get to one of the nearby exits. Or, maybe you see yourself cowering and freaking out in the corner. Statistically, you’re likely to do neither of those things. You are more likely to do something far weirder.

In catastrophic events like raging hurricanes, shooting rampages, sinking ships, volcanic eruptions, or even terrorist attacks, extensive research has discovered that you are more likely to become so overwhelmed by the flood of unexpected and ambiguous information during a perilous event that you will do absolutely nothing at all. Moreover, you are likely to experience an intense need to feel safe and secure. If it becomes clear this is impossible, then you will drift into a daydream where it is. And if no one comes to rescue you, you could die within the chaos.

Survival psychologist, John Leach, identified that 75% of people find it impossible to reason during catastrophic events. They freeze because of the immediate stress. The remaining either have a heightened awareness to act or they freak out in an uncontrollable panic.

The normalcy bias is a built-in survival mechanism. It is nature’s self-soother. It’s purpose is to give you the ability to continue to engage in your normal habits, still see the world as if nothing bad is happening, even if your surroundings says otherwise. It’s there to ensure your anxiety stays in check. In short, this bias is a state of mind where your brain is attempting to make everything seem normal by believing it still is.

Because of this, unfortunately, people underestimate the possibility of a disaster actually happening and its effects on their lives. They refuse to believe terrible events will ever include them. The assumption being that if a disaster has never occurred, then it will never occur. The reality of the situation, though, is that if events do escalate quickly and profoundly, then it can potentially overwhelm the brain so completely that it could result in a freeze — the brain gets stuck in an internal struggle — in search of a solution that never materializes. It leads to paralysis by analysis. And so, your brain does everything it can to keep you distracted as long as possible by saying “Don’t worry about it! Everything is OK!”, so you can avoid this very real, very dangerous cerebral deadlock.

Unfortunately this wired trait of ours doesn’t stop at natural disasters. It can, and does, plague us in real-world investment decision making as well. This is why the normalcy bias is considered one of the deadliest things that can strike an investor. By assuming things will always be fine because they have always been fine, you are putting blinders on to issues and not preparing yourself for change that is most likely coming.

No one thought the Great Depression would happen, nor the stock market crash of 1987 or 2008. But they did! All the signs were there, but people chose to ignore them.

An Investment Disaster Waiting To Happen

In 2007 Warren Buffett said the ideal candidate to replace him at Berkshire Hathaway needs to be “someone genetically programmed to recognize and avoid serious risks, including those never before encountered.”. He was referring to someone who won’t fall into the traps of the normalcy bias.

This shows that it doesn’t matter the level of experience one has in investing. The normalcy bias can afflict anyone. Investors who exhibit the normalcy bias behaviour, however, typically ignore negative news in the hope that the problem will simply go away. This can obviously have a dramatically negative impact on their investment portfolios.

Further, experts found that these types of investors tend to interpret warnings optimistically, often times clinging to ambiguities to justify their carelessness.

The consequences of the normalcy bias can therefore have these adverse effects on your investments:

Doing your research is the first line of defense in protecting yourself from this bias. Leach discovered that those who survive a catastrophic event and prosper were the ones who prepared for the worst case scenario ahead of time. They’ve done their research, or performed the drills, or built that protective shelter. They’re always the ones looking for the exits on the airplane and imagining what they’d do.

The same applies to your financial investments. If you have no idea what you would do in the event of, say the unexpected bankruptcy of a blue chip company as was the case for GM in 2009, you are more likely to suffer from analysis paralysis, which can slow your actions and expose you to serious financial losses.

It’s critical then that you visualize various pessimistic scenarios that could happen and prepare for them. Of course, the point is not to belabor it to the levels of paranoia, but to simply have realistic plans of action in place to address these problems if and when they do arise. The objective then is to at least mitigate and contain the damage that the issue could cause on your investments, and if you’re lucky, even profit from this downturn in the process.